To interested colleagues: to what extent do we have dialogue with participants in events such as the one below?

Summary: The goal of this panel is to explore the various strategies of imagining the Animal within cultural and scientific imagery. The Animal has been a source of interest for commentators throughout history, and ideas of what constitutes the Animal have informed ideas of what constitutes the Human. That is, Humanity has been, in part, defined in opposition to Animality. Contemporary and 20th century philosophers such as Derrida, Deleuze and Guattari, Agamben, Heidegger, Merleau-Ponty, and Haraway have all contributed to the discussion of the Animal, and this panel aims to understand these various conceptualizations of the Animal in relation to contemporary visual culture. In particular, this panel aims to interrogate the aesthetics of visualizing animals and to understand more fully the ways in which the relationship between the human and non-human animal is imagined within cinema, TV, and other media. Theoretical, philosophical, and/or historical approaches of all types are welcome, and this panel is open to analyses of any kind of contemporary media – film, TV, new media, advertising, painting, plastic art.

Possible topics include, but are not limited to:

Please send abstracts or proposals (250-500 words), including a five-item bibliography and brief biographical note, to Drew Ayers (dayers2@gsu.edu) by August 8, 2009. Selected presenters for the panel will be notified by August 15, 2009, and the panel will be submitted to SCMS by September 1, 2009. Acceptance of your proposal does not guarantee that SCMS will accept the panel as a whole.
Posted by Paul Cobley at 8:35 AM No comments:

The Turing Machine as Context.

The following was first posted on the Biosemiotics Forum, operated by Fatima Cvrckova:

"Consider this example of the a priori nature of context vis-à-vis meaning. The Turing machine, of which modern computers are a close approximation, contains within itself the capacity for all possible computations. This is to say, the computer contains all possible computational meaning. Programs, on the other hand, are informational, and in particular, serve to whittle away from the total set of meanings contained within a computer, yielding the particular subset of meanings that define a specific computational goal.

This is an excellent book. My thanks to Bruce Weber, for recommending that I read it. I've learned with every turn of the page.
Posted by William R. Buckley at 2:57 AM No comments:

Another Collage of letters

The discussions continued, especially about the notions of information and meaning, and finally Marcello wrote to me, "Our last round of discussions has gone up to 53 letters, so it may be useful to store them" - here, at our blog. The compilation can be downloaded as a pdf file.
When I grow old enough to become a historian of science, I'll be happy that I can retrieve them here again ;-)
Posted by Claus Emmeche at 1:57 PM No comments:

A must reading for all in the biosemiotics community: 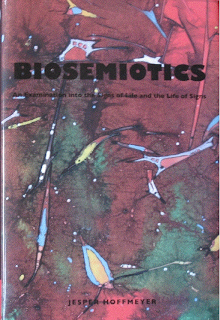 Jesper Hoffmeyer:
Biosemiotics. An Examination into the Signs of Life and the Life of Signs
Scranton University Press, 2008.

The book consists of three parts and a postscript. Part one contains a general discussion of the biosemiotic project as a strategy in life science and Part two contains a detailed exposition of biosemiotics as it may be employed in the understanding of life processes at different levels of animate nature. Part 3 addresses the radical consequences that the biosemiotic perspective will have on our thinking in a range of other areas: i.e., the origin of language, ethics, aesthetics, biomedicine, environmental understanding, health, cognitive science and biotechnology. In the Postscript is given a brief account of the historical development of the discipline, as well as a prognosis for its future growth.

See more about the book here.

Posted by Claus Emmeche at 12:42 PM No comments:

Collage of letters from the editorial team

"To the Members of the Editorial Team of Biosemiotics,
Dear friends,
Our Journal has just concluded its first year and I wish to have a brief consultation with you.
Please let me have a short comment on the three Issues of Volume 1, and your suggestions for the future. A few lines is all I need, so please let me have your feedback. " (...)

A long and vivid series of emails and discussion followed, and we decided to make that accessible to a wider audience here, hopefully to inspire and learn more about the diversity of opinions and approaches to biosemiotics.

The file with this "COLLAGE of Letters from the EDITORIAL TEAM", kindly compiled by Marcello, can be downloaded in a .doc and a .pdf version (click to download the full correspondance).
(Update of February 2: updated versions from Marcello here: download .doc and .pdf)
Best regards,
Claus
Posted by Claus Emmeche at 4:31 AM 2 comments: